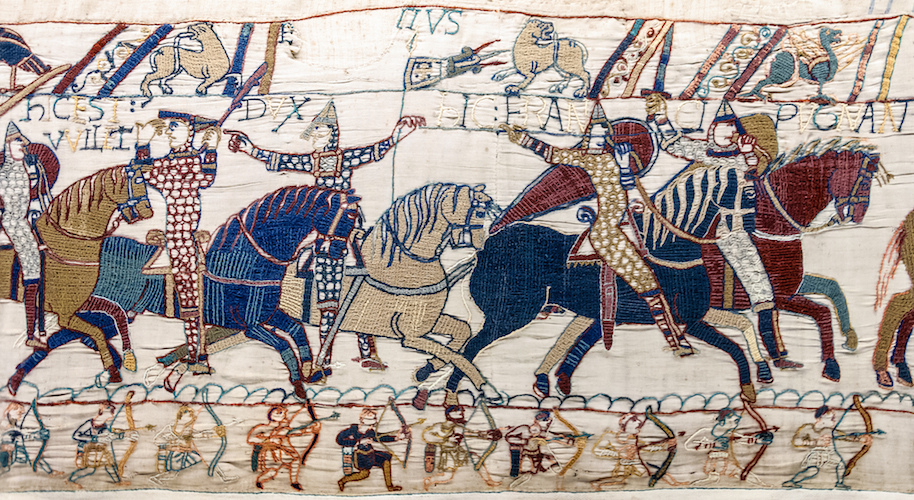 Bayeaux Tapestry, Scenes 55 & 56 - Duke William lifts his helmet to be recognized on the battlefield of Hastings. Eustace II, Count of Boulogne points to him with his finger. In the bottom margin, a row of archers.

Although our class begins with the Renaissance, it is a good idea to familiarize yourself with at least some of the main issues in western art prior to our period of study. For a more thorough introduction to this period of art, I recommend taking Art 187 at some point during your time at Miami.

The below content is primarily for context before our class on 14th century art.

One of the main themes from the history of art prior to the Renaissance centers around representation. What does it mean to represent something in a work of art? What should the relationship between image and referent object/person/place be? In ancient Greece and Rome, many artists attempted to replicate reality (or more often, an ideal version of reality) to the best of their ability. This is particularly apparent in the classical Greek sculptural tradition, which is also influenced by humanism.

Representation continued to be a point of interest after the rise of Christianity in Europe, especially during the Byzantine Empire. Given the proscription against idolatry in monotheism, artists and scholars rigorously debated about the appropriateness of representing divine figures in art–even going so far as to destroy existing works of art deemed idolatrous–during the Iconoclastic Controversy.

Optional: Met: Life of Jesus of Nazareth (useful resource if you are unfamiliar with the central figures and narrative of Christian art)

Despite this debate, Christian imagery continued to dominate western art, and Christian subject matter will continue to figure into the rest of Unit 1 of this course. The styles that artists use to depict these topics, however, will change significantly.

As you may have noticed in the iconoclasm article, the visual styles of the Byzantine Empire were quite different from that of ancient Greece, less seemingly “real” and more stylized. An example of this tendency in later medieval art can be seen in the Bayeux Tapestry, a work that uses images to tell a story. As you watch the video, notice the relatively flat sense of space and volume.

As we transition to the Renaissance, keep in mind what medieval art looked like. In discussions about style, we are not making judgments as to whether or not one style is “better” simply because it is or is not more realistic. Rather we can locate larger cultural and societal structures and concepts in the manner of representation artists choose.

For more on medieval art (and why the “Dark Ages” weren’t so dark at all!) navigate some of the other stories on the Middle Ages section of Smarthistory.