1.3 Florence and the Early Italian Renaissance 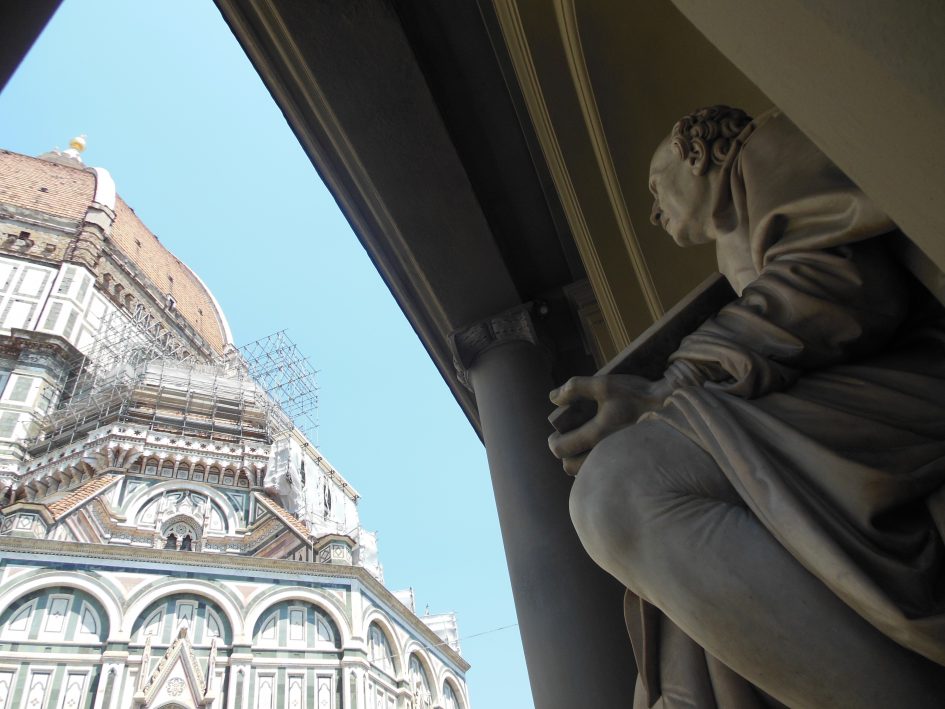 The Dome of the Florence Cathedral seen from a 19th century public statue of Brunelleschi. Photo by Annie Dell'Aria.

15th century Florence is in many ways seen as the cradle of the Renaissance. Urbanization, artistic innovation, and humanistic ideals all grew tremendously in the Tuscan republic, which was a political and cultural rival with other city-states on the Italian peninsula.

Smarthistory: Florence in the Early Renaissance

One of the significant forces in this historical shift was the Medici family, powerful bankers and patrons of the arts. Prior to class, watch episode one of the four-part PBS documentary series Medici: Godfathers of the Renaissance. This episode discusses two works we will be examining further: the dome of the Florence Cathedral designed by Filippo Brunelleschi (1377-1446) and the bronze statue of David by Donatello (1386-1466).

Episode 1 (55mins) The subtitles are automatically generated, and not terribly accurate. You can click on the CC button, then go to settings for language. There is a DVD of the episode (with Closed Captions) on reserve at King Library.

What is the relationship between art and politics in this period? What were the Medici family motivated by? Why did they want to fund new art and architecture?

What made the contributions of Brunelleschi and Donatello so radical in their day? How does the film portray the character of Brunelleschi? Of Donatello? Why do you think they made these creative decisions?

For a closer look at the dome of the Florence Cathedral and Donatello’s David, see the videos below.

Smarthistory: Dome of the Florence Cathedral

Connected to the renewed interest in ancient Greece and Rome was the growth of humanism, the idea that man is the measure of all things. This has impact in economic and social life, attitudes towards religious doctrine and philosophy, scientific inquiry, and (of course) artistic style and iconography. We notice this shift in works like Donatello’s David, which references classical nude sculpture, and more radically humanist ideals appear in two paintings by Sandro Botticelli (1445-1510) which eschewed much of Christian imagery altogether.

Smarthitory: The Birth of Venus

These radical paintings were not without pushback from the religious community, however, and much of Botticelli’s work was destroyed in the “Bonfire of the Vanities” of 1497 organized by the hardline friar Girolamo Savonarola.

For more on this chapter in Renaissance art, see episode two of Medici: Godfathers of the Renaissance (optional)

Why was Florence such an important city in the history of Renaissance art?

Who were the Medici family and what impact did they have on the history of Renaissance art?

In what ways were Donatello and Botticelli pushing the envelope with the works studied here? What norms did they challenge and what new pathways for art did they forge?

Florence in the 15th Century