2.1 Shifting Sensibilities: the Enlightenment and Rococo 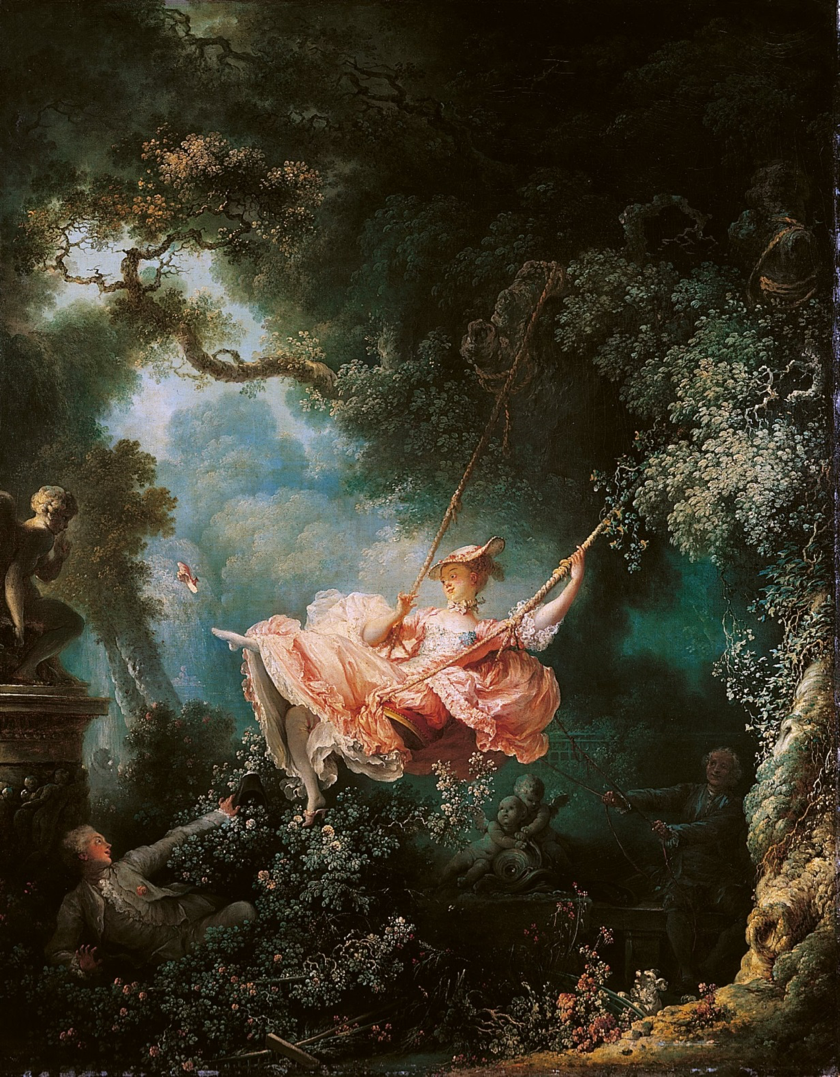 In France the Baroque period saw the consolidation of power by the monarchy, leading to the commissioning of grandiose palaces and works of art that would reinforce the “divine right of kings.” This is particularly important, as French art in the 18th century is in many ways a direct reaction against the French Baroque. Louis XIV was particularly adept at promoting a royal image through art and design, most notably in the Palace at Versailles.

How does the design of this palace connect to Baroque theatricality, which we learned about last unit? How does Louis XIV reinforce his power through architecture?

The Age of Enlightenment

The “long 18th century” (1686-1815) is often referred to as the Age of Enlightenment. Centered around the notion of reason, the Enlightenment saw continued interest in scientific learning as well as the growth of philosophical ideas of liberty, tolerance, and the separation of church and state. However, history is full of contradictions–this period also saw some of the most egregious human rights violations in history: the genocide of indigenous populations in the Americas and the expansion of the transatlantic slave trade.

People interested in the progress of enlightenment often took either the liberal or the radical stance. Liberal enlightenment thinking believed in a loosening up of restrictions and ways of the old world, whereas radical enlightenment thought wanted a complete overhaul of the ancien regime (old regime). This turbulent time saw both the American and French Revolutions.

Smarthistory: The Age of Enlightenment

In French art, architecture, and design, the reaction to the severity and grand style of the Baroque was Rococo This style was characterized by elaborate detail, natural motifs, curving forms, pastel colors, and the integration of multiple modes of artistic production in one space.

Antoine Watteau (1648-1721) was one of the first signature artists of the Rococo period. His works daringly depicted playful, theatrical, and seemingly frivolous encounters among members of the elite without any major narrative or moral on the grand scale of history painting (the most respected type of painting at the French Salon, the national exhibition venue of the arts).

Smarthistory: Watteau, Pilgrimage to the Island of Cythera

What is characteristically Rococo about these paintings? What is radical about them? Can you connect some of the cultural and political shifts of the period to Watteau’s subject matter and style?

Rococo painting, in addition to exploring the fashions and pleasures of the aristocratic class, often also explored shifting social norms. In The Swing, a famous painting by Jean Honoré Fragonard (1732-1806), the lush rococo forest is a setting for a depiction of liberated sexuality.

What specific elements of this painting connect to the loosening up of strict social norms?

British and American Art in the 18th Century

Rococo furniture and design spread throughout Europe and the British colonies in North America, though not without frequent inflection of enlightenment ideas and even commentary on the social and moral values of the day. The satirical images of William Hogarth (1697-1764) are an excellent example of a growing tendency to look upon the aristocracy with critical eyes.

What specific things is Hogarth critiquing about both the aristocracy (those born into high social status) and the newly wealthy (those who gained financial wealth through capitalism)? How does this series function as a set of prints?

In the American colonies, artists were largely self-taught and gained commissions by painting portraits of wealthy colonists who wanted to show their material wealth but also a greater sense of realism than the Grand Manner portraiture popular in England. John Singleton Copley (1738-1815) was especially adept at navigating the emerging market for art in North America and in leveraging his success for a place in the Royal Academy in England.

Museum of Fine Arts: Copley, Boy with a Flying Squirrel

What stylistic and thematic shifts do you see in art of the early 18th century?

In what ways is the art world being redefined by forces other than the church?