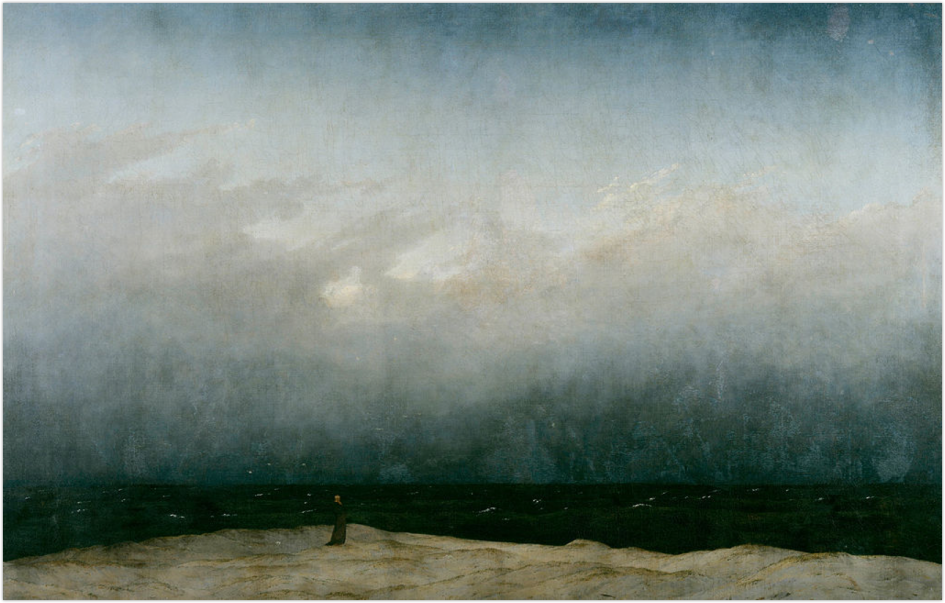 We saw in the Dutch Baroque period last unit the emergence of a new genre of painting: landscape. These paintings lacked a clear biblical or literary narrative, instead reveling in beautiful views and nature itself. With the emphasis on emotion and the sublime in Romanticism, the natural world became a further source of inspiration and landscape painting developed even more.

Caspar David Friedrich and the Sublime

In Germany, the concept of the sublime, particularly the individual’s experience with vastness, informed much of the painting of Caspar David Friedrich (1774-1840). Like the works in England and the U.S., these landscapes were also connected to shifting national identities in Germany. His use of the rear-facing figure places the viewer into the landscape, serving as surrogate in the pictorial space.

Smarthistory: Friedrich, Monk by the Sea

How does the figure operate in relationship to the landscape? What emotions does this painting evoke in the viewer?

John Constable (1776-1837) worked on his “six footers” from both observation and a sense of nostalgia in the midst of the Industrial Revolution. These large paintings challenged the hierarchy of the Royal Academy and depicted a natural world of calm reprieve, encapsulating what he called “the picturesque.”

Smarthistory: Constable and the English Landscape

Look closely at The Haywain. How does this painting connect with notions of the picturesque? With nostalgia?

Constable’s interest in landscape extended beyond painting and into printmaking as well.

Reading Constable’s text gives us a unique insight into what goes behind his artwork. What is his relationship to nature in this text? What does he mean by chiaroscuro of nature?

Working contemporarily to Constable but in a completely different vein was J.M.W. Turner (1775-1851), one of the most prolific painters of 19th century British art. Turner similarly challenged the norms of the Royal Academy, but used expressive brushstrokes and vivid color to connect to the emotional concepts central to Romanticism. Turner also did not shy away from the changing social landscape of the 19th century, such as the abolitionist movement and the transformation of Britain by the railway.

Landscape was particularly important to 19th century American art, as artists like Thomas Cole (1801-1848) used the vastness of the American wilderness as a counterpoint to Europe’s landscape of ancient and medieval monuments. For Cole, the west signaled potential for America’s future, though he also saw danger in developing its wilderness too quickly.

What makes artists turn to nature in this moment?

What does the natural world mean to these artists and how is that inflected by Romanticism?

In what ways is landscape painting connected to nationalism and other political concerns?