2.2 The Reign of Reason: Neoclassicism and Revolution 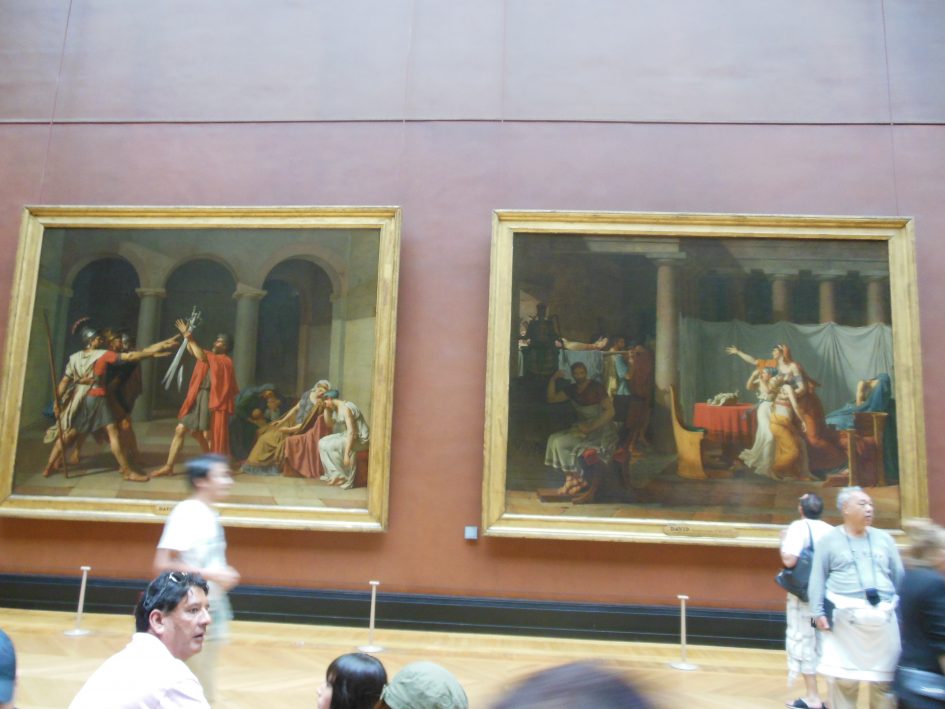 The Enlightenment’s focus on reason coincided with the emergence of industrial capitalism in the first industrial revolution. Many of the same people who supported science, liberal democratic principles, and the waning of religiousity were also deeply invested in industrial production and international trade. The Lunar Society, founded in Birmingham, England, was a perfect example of this synthesis. Joseph Wright of Derby (1734-1797) painted some of their members and activities, which brought scientific learning to the people.

National Gallery (UK): Joseph Wright of Derby, Experiment on a Bird in the Air Pump (read the article on the painting by clicking “Description” and “In-Depth” at the top left)

How does Wright employ chiaroscuro and tenebrism here? How does this compare with the work of Caravaggio?

Who is present at this scientific demonstration? What does this suggest about the social and cultural goals of the Lunar Society?

Josiah Wedgwood (1730-1795) was one of the businessmen who was an avid supporter of the Lunar Society. His claim to fame was the founding of a pottery factory (still in operation today) that mass-produced modestly priced wares inspired by the vogue for classical objects. Wedgwood in many ways exemplified many of 18th century Britain’s cultural identity and global networks of power.

Neoclassicism was the result of both a larger vogue for collecting classical objects as a sign of one’s sense of enlightenment and a stylistic revolt against the frivolity of the Rococo. Neoclassicists valued clear, didactic painting that not only recalled themes from the classical period but also promoted Enlightenment principles.

Angelica Kauffmann (1741-1807) participated in the tradition of the Grand Tour, an excursion by wealthy Europeans to take in the art and ruins of ancient Rome. Born in Switzerland and eventually becoming a founder of the British Royal Academy, Kauffmann had tremendous success despite the difficulties women artists still faced in the 18th century. The painting below is exemplary of Neoclassicism, especially how many of its paintings explicitly depicted a moralizing story.

Smarthistory: Angelica Kauffmann, Cornelia Pointing to Her Children as Her Treasures

How is this painting clearly Neoclassical? What differences do you see compared to Rococo painting? What is the moral and how does it relate to gender politics of the day?

One of Neoclassicism’s most important painters, and a man who very much changed the degree to which artists would be directly involved in politics, was Jacques-Louis David (1748-1825). David came through the Royal Academy in Paris, the art establishment subsidized by the monarchy, and his influence lasted for generations at the academy. Academic painting dominated European art in much of the 18th and 19th centuries and became a key institution against which the avant-garde would rebel.

Met Museum: The Salon and the Royal Academy in the Nineteenth Century

Optional Film: Simon Schama’s The Power of Art: David (for a more in-depth look at David’s life and politics, check out this excellent documentary)

David mastered the academic tradition of history painting, which at the time drew largely from ancient Greece and Rome for source material. The Oath of the Horatii is one of his most iconic paintings. It is not only an example of Neoclassicism’s formal and didactic qualities, but also a piece of visual culture that was of great importance to the French Revolution.

Smarthistory: David, Oath of the Horatii

Looking at Oath of the Horatii, what does it visually communicate to the viewer about concepts like patriotism, loyalty, family, and gender roles? How is David able to exhibit this at the Salon even though it is later picked up by the Revolution?

Once the monarchy fell and the French Republic was established, David’s art became directly involved with the goals of the Revolution. His painting The Death of Marat (1793) was a form of political propaganda and is considered a major turning point in the history of western painting. (This painting is discussed at length in the Simon Schama documentary linked above).

Despite the lack of columns or togas, what makes this a neoclassical painting? What stylistic elements connect it to David’s other work? What do you make of the top half of the painting? What does this space communicate to the viewer?

Neoclassicism and the New World

Neoclassicism coincided with the founding of the United States and was particularly attractive to new citizens looking to demonstrate democratic ideals and shed the legacy of the English crown and the Old World. However, with no established art institutions in place, major commissions often went to artists from abroad or to amateurs. French sculptor Jean-Antoine Houdon (1741-1828) carved one of the most iconic sculptures of the first president, and the third president, Thomas Jefferson (1743-1826) built his own home, Monticello, a case study in both the adaptions to Neoclassical architecture made in the United States and the inherent contradictions of espousing democratic ideals while participating in the dehumanizing institution of slavery.

What was Neoclassicism and why was it so prevalent during times of revolution in the Age of the Enlightenment?

How were artists intersecting with politics in different ways in this period?

What was the role of Royal Academies in art of the 18th century?