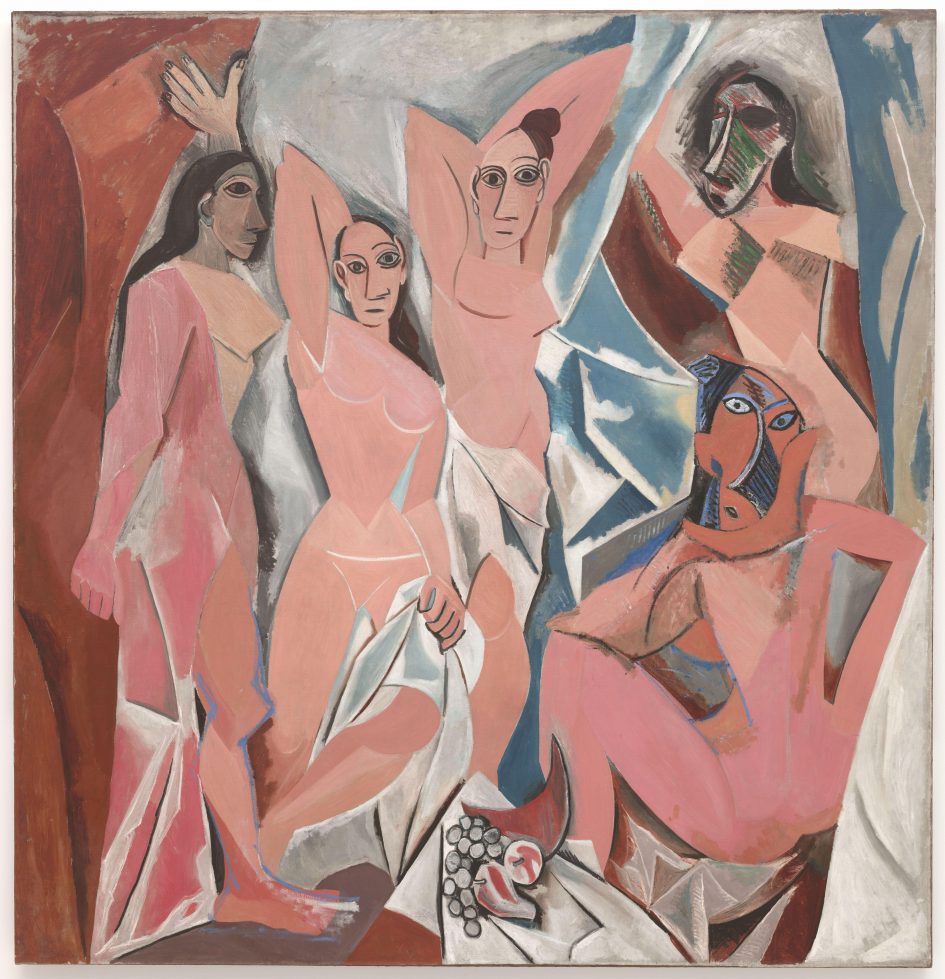 Just as Post-Impressionist color influenced the Fauves and Expressionists, Cezanne’s radical structural and spatial innovations inspired Cubism, a movement that continued modern art’s refusal of linear perspective and the singular vantage point that dominated western painting since the renaissance. Pablo Picasso (1881-1973), giant of 20th century art, and Georges Braque (1882-1963) worked together in the opening decades of the century to create both Analytical Cubism, which broke the subject matter down, and Synthetic Cubism, which built up an image from disparate materials and was one of the first uses of collage in a fine arts context.

Looking at Demoiselles, what makes this painting so radical–thematically and formally? How can you see the progression from this painting to Braque’s? How can you draw parallels to the new forms of vision evident in the above paintings and other cultural shifts in the 20th century?

The influence of Cubism was wide and varied as artists throughout Europe explored multiple viewpoints, light, and movement in a variety of different ways that challenged norms of representation. Movement was a particularly interesting thing for artists to explore, especially as film and motion photography became more widespread. The Italian Futurists’ interest in movement and dynamism was complemented with a larger cultural vision of industrial progress that was to carry Italy into the future. As a broader movement that included literature and theater as well as the visual arts, they rallied around a manifesto by Filippo Tommaso Marinetti (1876-1944), a document that also discusses the movement’s troubling relationship to war and violence that would come to a head as Europe entered World War I.

Visually, Futurist artwork was indebted to Cubism as well as some Post-Impressionist paintings. Umberto Boccioni (1882-1916) was one of the biggest names in the visual arts for Futurists, exploring movement, dynamism, and the radical integration of the figure and the space around it.

What parallels do you see between Boccioni’s works and the manifesto? How do you see connections to Cubism as well?