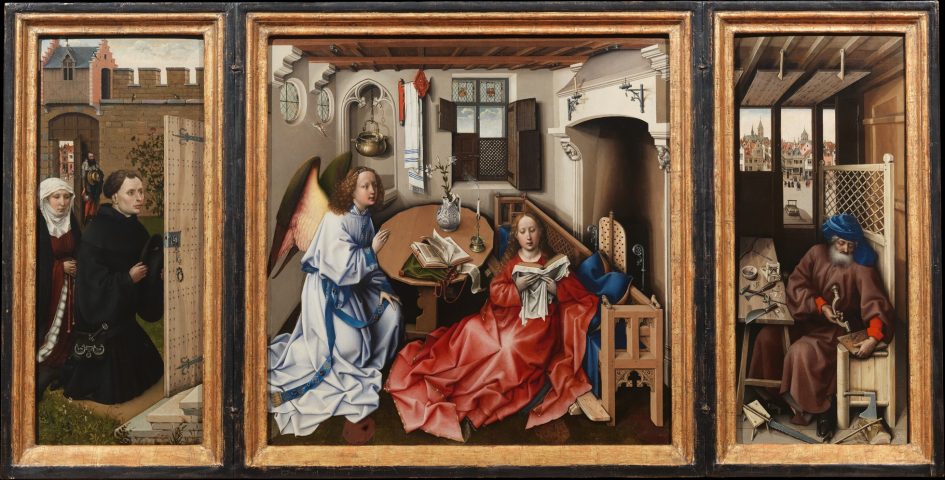 In the 15th century the Low Countries (an area consisting mainly of present-day Netherlands and Belgium) experienced tremendous artistic activity and experimentation. Fueled by a rising merchant class eager to purchase art and experimentations with oil paint, artists produced paintings that convincingly replicated the visual world in ways few people had ever seen before.

The Annunciation Triptych by the workshop of Robert Campin is an excellent example of early Netherlandish painting in an object for personal devotion.

Zoom in to the image via the Met article. What strikes you about this room? What details make you curious? Seem odd? How do they potentially relate to the story?

One of the most successful artists of this period and region was Jan van Eyck (1390-1441), an artist so skilled in the medium of oil paint that some erroneously thought he invented it. Van Eyck received commissions from the church as well as private patrons. One of these privately commissioned portraits has become one of art history’s most studied mysteries: who are the two figures in this painting, and what exactly are they doing this this very particularly rendered room?

What elements of van Eyck’s painting are most striking to you? How do you see the painting merging religious symbolism with naturalistic detail? Why do you think he would wish to do this?

Erwin Panofsky (1892-1968), one of the twentieth century’s foremost art historians, wrote a significant essay on this portrait, attempting to solve the mystery of its original commission through what we call iconographic analysis, or interpretation through symbols. In the essay, Panofsky attempts to solve a mystery regarding the origin and function of the painting, which had no documentation or title to indicate who is depicted within it. Though his conclusion (that the painting acts as a sort of marriage certificate) has since been questioned by art historians, his identification of religious and sacramental symbols in the painting–and how they exist within a seemingly naturalistic setting–is important for understanding how painters like Jan Van Eyck were a link between the religiosity of the medieval period and the humanism of the Renaissance. I have excerpted from the conclusion below:

Now, I would not dare to assert that the observer is expected to realize such notions consciously. On the contrary, the supreme charm of the picture–and this applies to the creations of Jan van Eyck in general–is essentially based on the fact that the spectator is not irritated by a mass of complicated hieroglyphs, but is allowed to abandon himself to the quiet fascination of what I might call a transfigured reality. Jan van Eyck’s landscapes and interiors are built up in such a way that what is possibly meant to be a mere realistic motive can, at the same time, be conceived as a symbol, or, to put it another way, his attributes and symbols are chosen and placed in such a way that what is possibly meant to express an allegorical meaning, at the same time perfectly “fits” into a landscape or an interior apparently taken from life

If you like, you can read Panofsky’s full article by logging into the Miami library via the link below. The language is a bit difficult to get through, but try your best and focus on the conclusion on the last three pages.

As mentioned in the video and article, there are many curious details in this painting, and many students immediately notice the woman’s dress, and that she appears to be pregnant. While she is almost certainly not meant to be pregnant (as there were certain cultural restrictions on depicting pregnant women at the time), the painting has an interesting relationship to expectations of pregnancy in the 15th century.

Another curious detail is the presence of a figure in the curved mirror. Potentially the artist, this image makes us question what van Eyck’s self-image as an artist may have been. Another painting that has also been speculated to be a self-portrait (discussed below) is an excellent example of a three-quarter-view portrait, which animates the figure and became highly sought-after by both nobility and the emerging merchant class.

Smarthistory: Portrait of a Man with a Red Turban

Of course not all painting from the Low Countries in the 15th century was small and for individuals. Large altarpieces were still commissioned, and Jan van Eyck completed one of the most significant ones of the period, part of which was rescued from a Nazi salt mine by a group of Allied servicemen and scholars called the “Monuments Men” in World War II.

Optional: Periodical: Monuments Men sought to return the most desired object in history

What relationships do you see between the religious painting and the more (seemingly) secular work? How does the altarpiece connect to the rituals in the church and how does its ability to open and close function in relationship to the viewer?

One of the painters who came close to rivaling van Eyck’s fame was Rogier van der Weyden (1400-1464) who looked to emotionality to intensify the spiritual connection between image and viewer, perhaps most famously in his Descent from the Cross, now hosted at the Museum del Prado in Spain.

Museo del Prado: The Descent from the Cross

In what ways is this an “emotional” painting? Point to specific details and formal components of the work. How does this emotion connect to the spiritual content of the work?

What are some possible explanations for the relationship between religious content and an increasingly detailed depiction of the natural world in 15th century Netherlandish painting?

What does iconographic analysis provide for the study of art history? What is necessary to learn in order to decode works of art in such a way?