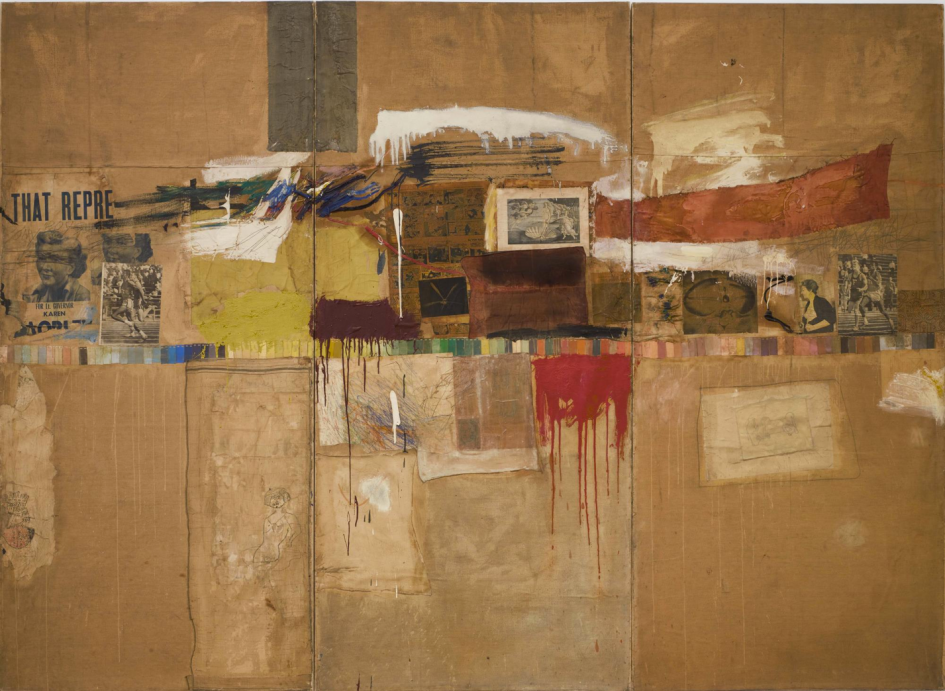 As we’ve seen throughout a lot of twentieth century art, the movement that followed Abstract Expressionism both reacted against and continued some of its ideas. The work of Robert Rauschenberg (1925-2008) and Jasper Johns (b.1930) in some ways took inspiration from Pollock’s use of the canvas as an “arena in which to act,” but began to incorporate the banal and everyday rather than universal, existential truths. Taking inspiration from Marcel Duchamp’s use of readymades as well as avant-garde composer John Cage’s (1912-1992) radical incorporation of ambient sound into his composition 4’33” (1952), Rauschenberg and Johns embarked on an artistic collaboration that challenged medium-specificity and the divide between art and life.

How do the works discussed above bridge the gap between art and life? How do they both challenge and continue the legacy of Jackson Pollock? What issues of categorization arise when you consider these works?

John Cage wrote about Rauschenberg’s paintings, demonstrating some of the principles that bound the two artists together. While reading this work, consider Rauschenberg’s piece Rebus (1995), the featured image on this page and linked via the MoMA below.

Neo-Dada’s incorporation of the everyday in works of art continued in the Pop Art movement, a style synonymous with American consumerism and popular culture but that actually started in Britain. Richard Hamilton (1922-2011) was one of British Pop’s foremost artists.

American artist Andy Warhol (1928-1987) is Pop’s most well-known artist, and a game-changing figure in the art world on par with Marcel Duchamp and Jackson Pollock before him. Warhol not only blurred the lines between fine art and commerce, but also was influential in avant-garde film and redefining the self-presentation of the artist. Some of his most well-known paintings from the 1960s deal with repetition and seriality in mass culture, often as a commentary on death in the age of consumerism.

The Art Story: Andy Warhol (skim through key ideas and biography and look at main artworks)

How does Warhol’s art raise questions about authorship and originality in an image-saturated world of mass-produced commodities? What does his process say about art making?