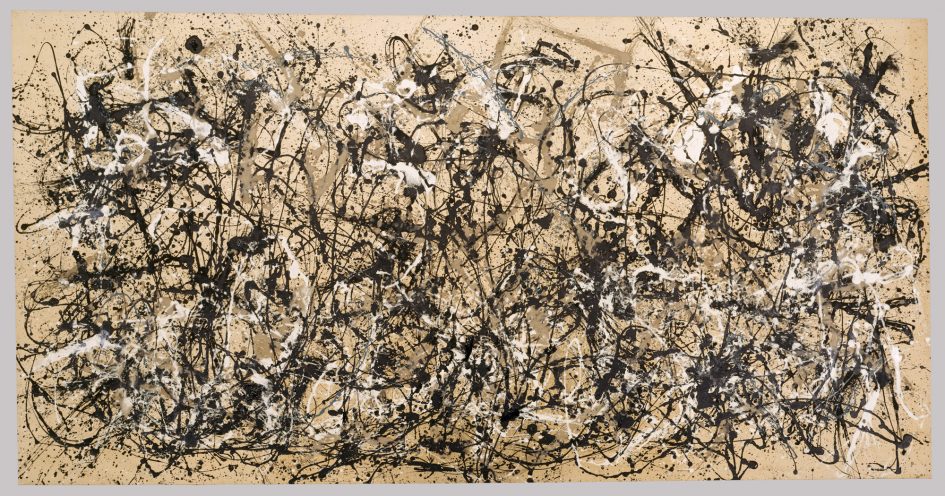 World War II radically changed the cultural, economic, and geopolitical landscape of the world. In the arts, the former centers of Europe were left traumatized by terrible conflict and Nazi occupation while across the Atlantic New York City rose to prominence as a major art capital. Artists throughout the world responded to the radically changed world through both figurative and abstract strategies, using new means to depict postwar life. Swiss sculptor Alberto Giacometti (1901-1966) and Irish-British painter Francis Bacon (1909-1992) are two examples of European artists who remained interested in the figure in art, but depict a figure that has been whittled down or irrevocably broken by the horrors of war.

In the postwar years in the U.S., however, figuration was abandoned for complete abstraction. The migration of many surrealist artists from Europe to the United States during World War II as well as increased federal funding for the arts during the Great Depression made 1940s New York City a hotbed of avant-garde art. At the war’s end, a new style emerged that employed automatism, non-objective abstraction, and massive scale–Abstract Expressionism. Hailed as one of the first major modern movements in American art, Abstract Expressionism was largely defined by the prolific work, turbulent life, and critical writings about Jackson Pollock (1912-1956).

Looking at Pollock’s painting, what major modernist concepts does it engage? How does Abstract Expressionism fit into a narrative we have been describing from the mid-nineteenth century through the twentieth? In what ways also does his painting challenge our expectations from a work of art?

Pollock’s uniquely American outward-facing personality as well as the wealth of critical literature contemporary to his paintings (especially from the competing schools of Clement Greenberg (1909-1994) and Harold Rosenberg(1906-1978)) have also shaped how his works have been read and understood in art history.

Primary Source: Two Pollock Interviews and Pollock statement (skip other readings between these)

What new insights do Pollock’s responses to interviews and questionnaires give to his painting? How is the painting connected to the artist? Considering the competing ideas of Greenberg and Rosenberg – how does Pollock’s work fit into both notions?

Despite the somewhat dogmatic proclamations of Clement Greenberg about medium-specificity (the notion that advanced painting can be judged solely by how it works within the physical constraints of its medium), Abstract Expressionism quickly incorporated the figure. Among the first to include the figure within an Abstract Expressionist style were Grace Hartigan (1922-2008) and Willem De Kooning (1904-1997).

Despite both the machismo personality of Jackson Pollock, the movement’s brightest star, and the rather restrictive cultural notions of womanhood that dominated the postwar era, a number of significant woman painters rose to prominence in the Abstract Expressionist movement. Lee Krasner (1908-1984) completed her “Little Images” while living with Jackson Pollock, who produced large scale canvases in the barn studio in their home on East Hampton. These paintings, as well as Krasner’s later large-scale works completed after Pollock’s death and rise to art historical fame following the feminist movement in art history, illustrate how difficult it was not only to overcome the institutional hurdles that prevented women from rising to prominence in art history but the cultural ones as well.

Abstract Expressionism and Art in the Aftermath of World War II